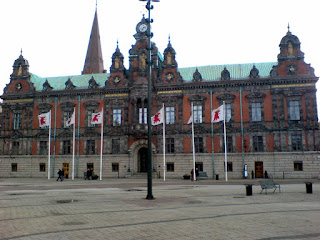 “It’s sweet to be in
the rain and sleet
as my two lil feet
walk down the street
IN SWEDEN!”
It could not have been easier. Around noon I headed out from my hotel to the S-train, took it down to the center station, transferred to the train to the airport and to Sweden and a total of 55 minutes later I was there! I walked out and the weather had not improved much. Still very windy. By very windy I mean bikes are falling down, flags are being ripped off, and plastic sheets are molesting people in the street.

I am not sure if it was a sign or not, but many places were closed and it was sleeting and raining, so I went to a square and found a wonderful shop to have lunch. I was worried I would not have the money to pay. In fact, I was thinking about the fact that I still had Danish money when I needed Swedish, but that was not the issue. Prices were! What is up with Scandinavia being so expensive? Have I really been in the land of $1 DVDs and no tipping for that long? Here are some of the tally’s for the day:
…
Actually, I will spare you that. Suffice it to say I had learned my lesson, when I realized I bought three magazines for 256 Danish Kr. which is $42 USD. (That is not a typo). The one saving grace is that I did manage to get the student discount at the castle museum :)

Check out some of the pictures from the day in Malmo. I have also posted pics from Saturday in Copenhagen. Both of these can be found on the Recent pictures on the left. You can also see that two maps have been updated . The one from Flickr and the one of places we have been. Check them out: https://beuk.tv/maps 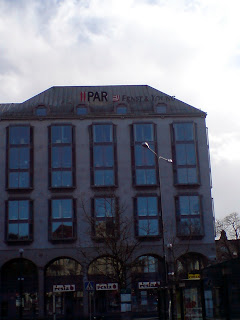 Last, but not least, “Honey, there IS an E&Y office in Sweden (and a KPMG one ;). With all the VAT they are charging, there has GOT to be some tax biz going on.”