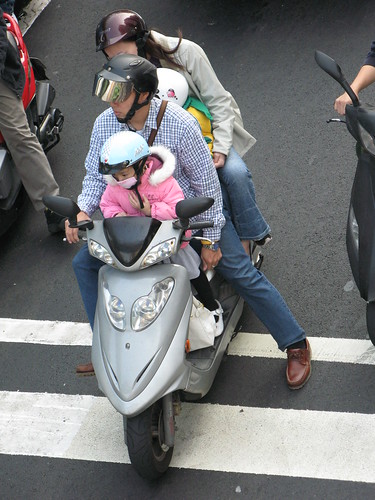 The news this week reports that Taiwan

NOTE This is for CYCLISTS. NOT the scooter seen here. Some of the offenses include:

By my account I am guilty of all of these except fail to install brakes, lights, and bells (How far do you get if you fail to install brakes?). The “other person” is Gioia who I often carry to and from school on the bike. I am not sure the government has their priorities straight here. I know they “stalled” it and that is good, but why is it even being considered in the first place?

We haven’t owned a car in 3.5 years and are darn proud of it (sorry GM)! This means, no fuel, no insurance, no car taxes, no repair costs, and most importantly no pollution. Taiwan is super easy to get around on bike, foot, and taxi and it just makes no sense. When we need to we rent a car and go a lil farther out of town.

Now Taiwan would also have you only ride on approved (cough, cough) bike paths.

The problem is unless I want to go to a river, a river, or a river, there are just not too many “approved” bike paths. Fortunately Ren-Ai Road (where we live) IS an approved stretch so we don’t run into too many problems, but come on. Share the Road!

I guess it makes sense that they “Stall” this week, especially since they just started the U-bike system where you can rent a bike and ride it around town. Only problem is you need to be rich and own a credit card. (Dear Taiwan, here’s a tip: The rich aren’t riding their bikes!)
Taiwan is also currently holding Taipei Cycle 2009 this week. Guess it would have looked bad to fine everyone you were trying to get excited about riding bikes.

So, in short:
Bikes with babies and no pollution = BAD
Families of four on scooters = GOOD
…and we will “un-stall” later and fine bikers. Great.

In the mean time, don’t get your testicles in a bunch ;)