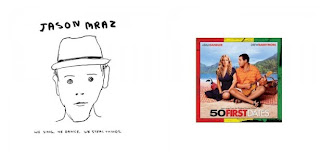 This is too strange to be a coincidence:

To say I am out of touch with the US music scene is an understatement. I have no idea about pop artists and who’s hot and who’s not. It takes me finding one of B’s People mags laying around for me to even know a person’s name. So, suffice it to say on our trip to the States when I tuned into Star 94 to hear the same six songs over and over and over again, I had no idea who I was listening to. No worries. iPhone to the rescue! I recently downloaded Shazam. Basically, a simple app that records 10 seconds of a song, then looks it up in a database. Doesn’t do me any good in Asia, but is the States it works great giving you artist/album/etc. So, one catchy tune and 10 seconds later I find out I like this song by Jason Mraz called “I’m Yours”.

Now, I need this tool as I couldn’t name a song/artist to save my life. When I was little I played “Name That Tune” on TV with my parents and I rocked it. Granted, these were all songs of the 40’s, but I was good at hearing the immediate details. Last week I went to trivia and was in awe as my friends were racking up 55+ points naming every song that came up. I can’t do this as I don’t know the songs, but what I do know is the music. High school band, college band, drum corp, symphony… what these have all taught me to do is listen. I can listen to a 120 member corp play a piece and tell you not only which person played a wrong note, but what the note was and what it should have been. So, back to Jason and “I’m Yours.” I found it undeniably similar to Wyclef Jean’s – “Your Love (L.O.V.E. Reggae Mix)” from 50 First Dates. Listen to it. You can even sing the words right on top of Jason’s song.

This was enough for me to write this post, but I was curious. Maybe this Jason guy also sang LOVE. Nope, it was Wyclef, BUT while I was looking all of this up Shazam told me title of Jason’s album is “We sing, we dance, we steal things.” I agree with the stealing part. Especially, since on the 50 First Dates album, track 12 is sung by none other than Jason. Call it sampling. Call it too much listening to that album and getting the rifts stuck in your head. I think it is either a very strange coincidence or a very small world.

In wine there is wisdom, in beer there is strength, in water there is bacteria.”
~David Auerbach