Now I know what you are thinking: Chris is back behind the wheel after a two year hiatus and therefore he must be driving very fast, again. Well, that is not the case :P In fact I am the slow one on the interstate. Just ask my sister, who can not believe how slow I drive. I think the words she used were, “Learn to drive like a Chicagoan.”

In fact it is quite a different story. These two weeks in the States I have many errands to run, and rather than leave Frankie at home I bring him with me in the gas-guzzling SUV I have rented. Turns out he is quite handy. Parking lot attendants let me park anywhere I want without forcing me to valet. My car is watched constantly while I am away, and they always want to know that I will not be more than a few minutes. In addition, no bums bother coming up to the car with Frankie in it. That all said, Frankie does attract attention. He was an attention grabber in China, but that was because he was a big white dog. Turns out he is an attention grabber in America because… well, he is a big white dog.

While we were driving, a cop pulled up and waved me to a stop. Now I am driving like a grandma, so I know I am not speeding. He says, “Hey, what kind of dog is that?” Turns out he was intrigued and could even tell Frankie was beautiful through the tinted glass.

That stop was in the morning. The next time we were on foot, so I really wasn’t doing any speeding. I had just purchased a used camera and I was anxious to test it out. Turns out now a days you can’t just walk down the street and take pictures of the Sears Tower with a telephoto lens. Who knew? Well, I guess it makes sense, but a cop stopped us (Frankie was with me) and asked what I was doing. I told him and showed him some of the pictures. He then wanted to say hi to Frankie, who was more than happy to oblige.

Because you know all good terrorists carry a white boxer around with them, right? 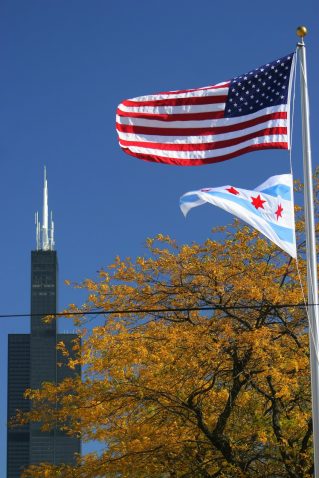