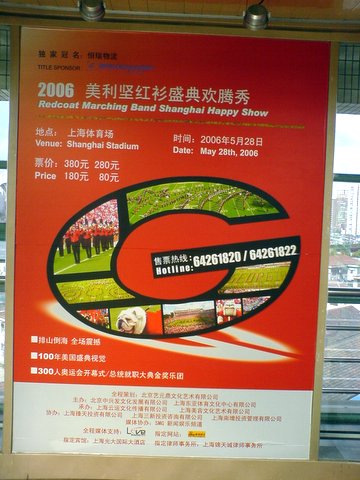 I must admit I think I have been in too long when the crazy things I see on the street are just not so crazy anymore.  A baby with a split in his pants?  Enh. Bicycles carrying washing machines?  Seen it.  Live shrimp for dinner?  That is sooo.. 2005.  BUT then I saw the strangest thing of all.

‘s Marching Band is coming (has come) to .  I actually got excited about this.  Today is the 24th (of August) and the sign says the 28th!  "I haven’t missed it", I thought.  I even considered calling my friend Tim (UGA Grad) and raising the white flag long enough to go see the band perform (I was a drum major after all).  Then I realized it is for the 28th OF MAY!!!!  Why is this stupid sign STILL UP?  Don’t they have something better to advertise?  So, on that point, who went to this?  I can’t imagine the Chinese in western on their way home from work on the subway reading this sign and saying, “Yeah, I do need to see the UGA Redcoats Marching Band.  Whatever a redcoat is” (NOTE:  redcoat does not equal green hat).

I think this was very poor marketing for two reasons.  One, don’t they know all the Chinese went to Tech?  They already knew how to farm (yeah, I know, my sites gonna get blocked for that one).  Two, is the best part of this story.  Look closely at the top of the G and see what field they are marching on.  What’s the good word?