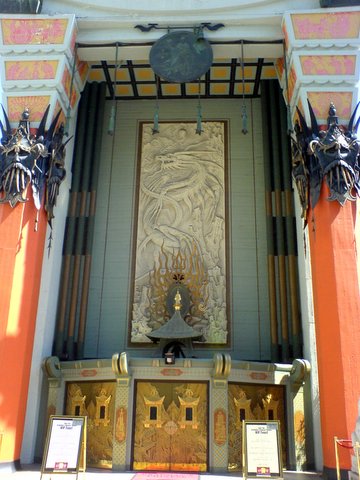 You asked for more news from LA, so you got it:

So, I make it all the way overseas to be able to see the Chinese theater! How cool, eh? Actually it was. Early, Friday morning I took the $1.25 Metro over to Hollywood. I wanted to get off at Hollywood and Vine only because the Kidd Rock song has been playing in my head all day. The Metro is great. I bought a ticket both ways, but I am not sure why because there was nothing to check or take my ticket. It is probably because nobody was using the Metro at all. None the less I had my camera at the ready in case I saw anybody famous, then I realized: famous people don’t take the subway.

was a ghost town at 10am. The only things open were the bars showing the WC. (Note: Holland won 2-1 and I got 7 points!) I took tons of pictures of the stars: **Brittney for Shane – this is right outside the Chinese Theater and next to Mary Kate and Ashley Olsen (poor Anthony Perkins)

**Lawrence Welk for my parents (yes, I do remember)

**The Monkees for me – I tried to be artistic with the second shot. (It was cooler in my head.)

**Harrison Ford for B – and I love you so much I took it twice. No, actually I found it twice. Why is that? You can see one and then you can see my shadow about 4 blocks away showing two fingers for the second one. Anyone know what is up with that?

The Kodak Theater was nothing of what I expected. In fact, I walked by it twice before I found it. Then it looked nothing like the pictures. I could not figure out where the stars got out of their cars.

Last but not least was all the ads for the cars movie. The coolest being the car on the street. After that I returned to the hotel. When the tour guide says wear sunscreen, do it! See all of these pics here!