So, see if you can follow this one. Forgetting all about my whirlwind trip through Chicago yesterday I had a whirlwind day! I went from Shanghai to Hong Kong to Taipei to see my house for the first time with our things in it. B has done a great job getting it set and everything is in its place EXCEPT HER! She had to work in Tainan.

Quick Chinese Lesson:
Tai in Chinese means much. It could also mean things like great and grand or in this case capital, such as Taibei (the Chinese way to say Taipei). Because it means too much you can easily see why a WIFE is called Tai Tai, meaning way too much, but that is another story. The “bei” part simply means north. Similarly, “nan” means south so therefore Taibei is on the northern part of the island and Tainan is on the southern tip of the island. Think of it as North and South Dakota and you got it. Now, ignore a few language rules and you can see why the northern and southern capitals of China are… Beijing and Nanjing! Cool, eh!

As easy as the naming convention is, it is easier to get there. An hour after being in Taibei, I headed to the train station. The key to getting to the other side of the island fast is to take the high speed train (gao tie). Silly me, I asked the ticket lady how do you say high speed train in Chinese and she said, “High Speed Rail.” Hence, it is called the HSR, duh. Who said Chinese is hard.

Today I walked around a bit of Tainan called AnPing. It is a actually a 1600’s Dutch colony that was taken over by the Chinese, the British, the Japanese and finally the Taiwanese. While there I got to see Fort Zeelandia the Eternal Golden Castle and much more! 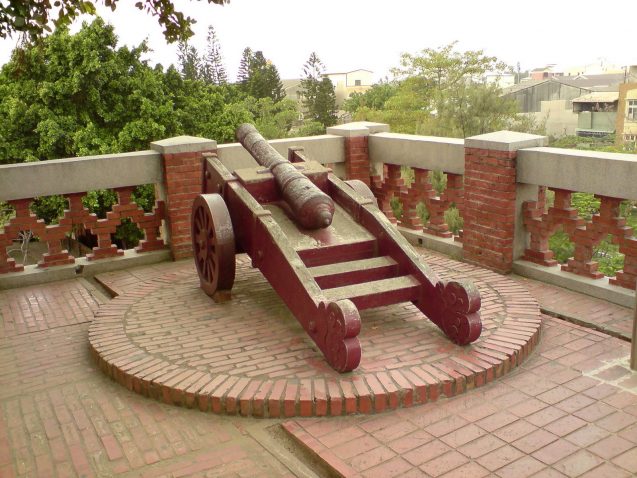 For those of you who are aware of my slight OCD, a quick note: This week I also am researching my family tree. I have just been connected with the great grand daughter of my great grand uncle or some such. We are currently working to get the family tree updated, but more on that in a different post. The KEY part is that we have traced the heritage BACK TO 1600. Now, why this week of all weeks am I confronted with TWO 1600 Dutch references?

Lunch was in a cute lil coffee shop I found on the way. In just two days I am extremely surprised how nice people are. Today the waitress there was very kind and obliging to me when I explained that I could not read the menu, but if she could read it to me I could pick something out. We got to talking about life and how I came to be in Tainan and such. Apparently, they do not get too many foreigners on the south side and even less that can speak some Chinese. She was so excited she wanted to take my picture for her blog and I returned the favor.

All in all the trip was quite nice and I am eager to take the HSR back to our new apartment and get settled in!

1 thought on “Planes, Trains and Automobiles”